“If I hadn’t gotten the smear test, I wouldn’t have made it to see my daughters second birthday.” 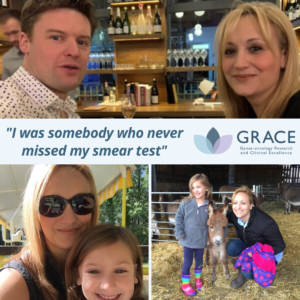 During Cervical screening week, Emma Louise Davies, one of our brilliant GRACE Woman spoke to BBC Surrey about her Cervical Cancer experience, being diagnosed so soon after her daughter’s birth and why she believes cervical screening is so important, listen to the below interview to find out more.

The cervical screening programme, which had been suspended due to COVID-19, has begun to be restored.

There will be prioritisation  for:

– Women invited but not screened and people with a delayed invitation

– Women invited for routine screening (due or overdue)

But anyone who is eligible, due a smear test and asks for it, will also be able get it.