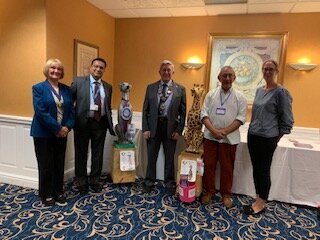 We would like to thank GRACE Supporter and Volunteer, Roger MacDivitt for his continuing awareness and fundraising activity. Not only is he promoting the GRACE Hound around Haslemere raising funds for GRACE, but he also organised a hugely successful Three Counties Immunotherapy Day in August which took place in various locations around Haslemere – Midhurst Old Library, Grayshott’s Gurkha Dubar Restaurant and the Georgian Hotel, Haslemere.

Mr Jay Chatterjee Consultant Gynaeoncologist who spoke for GRACE described an excellent evening raising awareness about immunotherapy and its evolving role in the treatment of cancers. A lot of the Immunotherpay strategies that Jay described are still experimental in gynaecological cancers and are being tested in clinical trials. Many of our own GRACE researchers are working on these ideas. 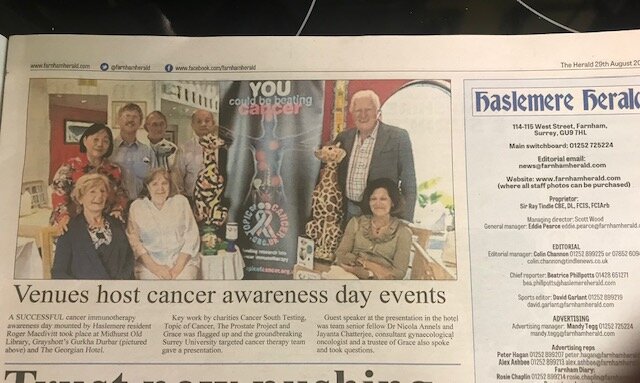 The hope is that in the years to come they will be part of mainstream cancer treatment for some of the gynaecological cancers as these therapeutic approaches become relevant as adjunctive therapies and we get more robust data to justify their usage in improving patient outcomes. We are already treating some ovarian cancer patients with platinum resistant cancers with drugs called PARP inhibitors, which boost the immune response to these cancers. Read more about this below in an article first published by Ovarian Cancer Action in March this year.

“New research from The Institute of Cancer Research (ICR), London has discovered that precision cancer drugs called PARP inhibitors have the ability to boost the immune system, and thus could help more patients benefit from immunotherapy. PARP inhibitors, such as Olaparib, work by targeting weakened cancer cells, and shutting down their ability to repair damage in their DNA. Being unable to repair themselves, the cancer cells die. The researchers in the study found that PARP inhibitors had worked to expose the cancer and ‘sparked a powerful immune response’. The buildup of DNA damage was seen to trigger the release of various molecular signals that could have helped attract immune cells to the site of the cancer.

While immunotherapy is an exciting advancement, it is still in its early stages with many cancers, ovarian included. One of the issues is helping our immune system find the cancer in the first place. According to this recent study, PARP inhibitors appear to assist here by unmasking and drawing immune cells to the cancer. This suggests that if PARP inhibitors are used in conjunction with immunotherapy, the immune response could be further enhanced to attack cancer cells more effectively.”

Jay described some of the work being performed:

“Immunotherapy is an evolving adjunct to the conventional cancer therapies in clinical practice. Some of the strategies involving the immune system to target cancer cells and the associated pathways and micro-environments include:

Checkpoint inhibitor pathway blockade. Like the anti- PD-1 and anti-PD-L1 therapy. Cancer cells uses the inherent checks and balances of the immune system to evade immune response and thus prevent he immune system from mounting a retaliation against it. Hence by blocking these pathways by using inhibitors, we enhance the immune system mediated tumour antigen killing .

Using cytokine therapy like anti-IL-10- Certain secretory molecules in the immune system transform the killer T-cells so that they are no longer potent to initiate a response to the cancer. By using immune-modulators, we can reinvigorate such cells to mount a potent response.”