Our GRACE Woman, Elizabeth, is passionate about raising awareness of cervical cancer following her diagnosis last year. Here, she talks about her diagnosis and treatment, and urges all women to attend their cervical screening.

“I was diagnosed with cervical cancer in January 2017. In late summer 2016, I started to get symptoms – a yellow discharge. I didn’t really think anything of it. I just thought I had a mild infection, so I didn’t get to the GP until 3 months later. Initially the doctor thought it was an infection too, then suggested it might be fibroids. I’ve never had any gynaecological issues, so I kind of knew that it wasn’t fibroids, but I was referred for a ultrasound scan anyway.  In the meantime I had a vaginal bleed just like a period and it was then, given I was well beyond menopause, I got really scared. I immediately went back to my GP and he said: “don’t panic, but I’m going to put you on a cancer pathway”.

My scan results were fairly normal but a subsequent attempted hysteroscopy revealed visible abnormalities on my cervix.  They took biopsies and the laboratory report came back with a diagnosis of cervical cancer. In February 2017 I had a radical hysterectomy. This was a two step procedure. First, I had my pelvic lymph nodes removed, then a few days later I had the actual hysterectomy. I hoped that was the end of it, but after further tests I was advised to have radiotherapy and chemotherapy.  I’d thought I’d be back to work 2 months after my hysterectomy, but 6 sessions of chemo and 27 sessions of radiotherapy meant my treatment carried on into May 2017.  I was really weak after that and had severe musculo-skeletal back pain.  I needed a lot of physiotherapy and it took me until October until the pain started to improve.

As a result of my treatment, I have some long term side effects which can be a bit of a burden. One of these is lymphoedema (swelling due to the accumulation of lymph fluid) in my right leg, groin and lower abdomen. This is due to damage to my lymphatic system caused by removal of lymph nodes prior to my hysterectomy and further damage from the radiotherapy. It kicked in almost immediately after my treatment finished. I now have a daily regime of self-managing the condition, including skin care and daily exercises. It helps for me to keep generally active and raise my legs whenever possible. Also, I have been taught a massage technique: simple lymphatic drainage (SLD) which I try to do on a daily basis. And I wear compression tights or stockings which take a bit of getting used to, but do help.

A second difficult side effect of my treatment is I’m not able to empty my bladder (urinary retention) because of nerve damage which occurred during my hysterectomy.  This means I have to self-catheterise, which involves passing a tube through the urethra into the bladder, about 4 times a day.  I have a very scheduled life now to enable me to cope.  It means it can be quite difficult to go out sometimes, particularly in the evening. My understanding is that urinary retention, following a radical  hysterectomy, usually resolves within a few months. This didn’t happen for me and I’ve struggled, physically and psychologically, to come to terms with the situation.

These side effects have meant that my life has changed an awful lot – I’ve had to give up my job and my running which I used to love. 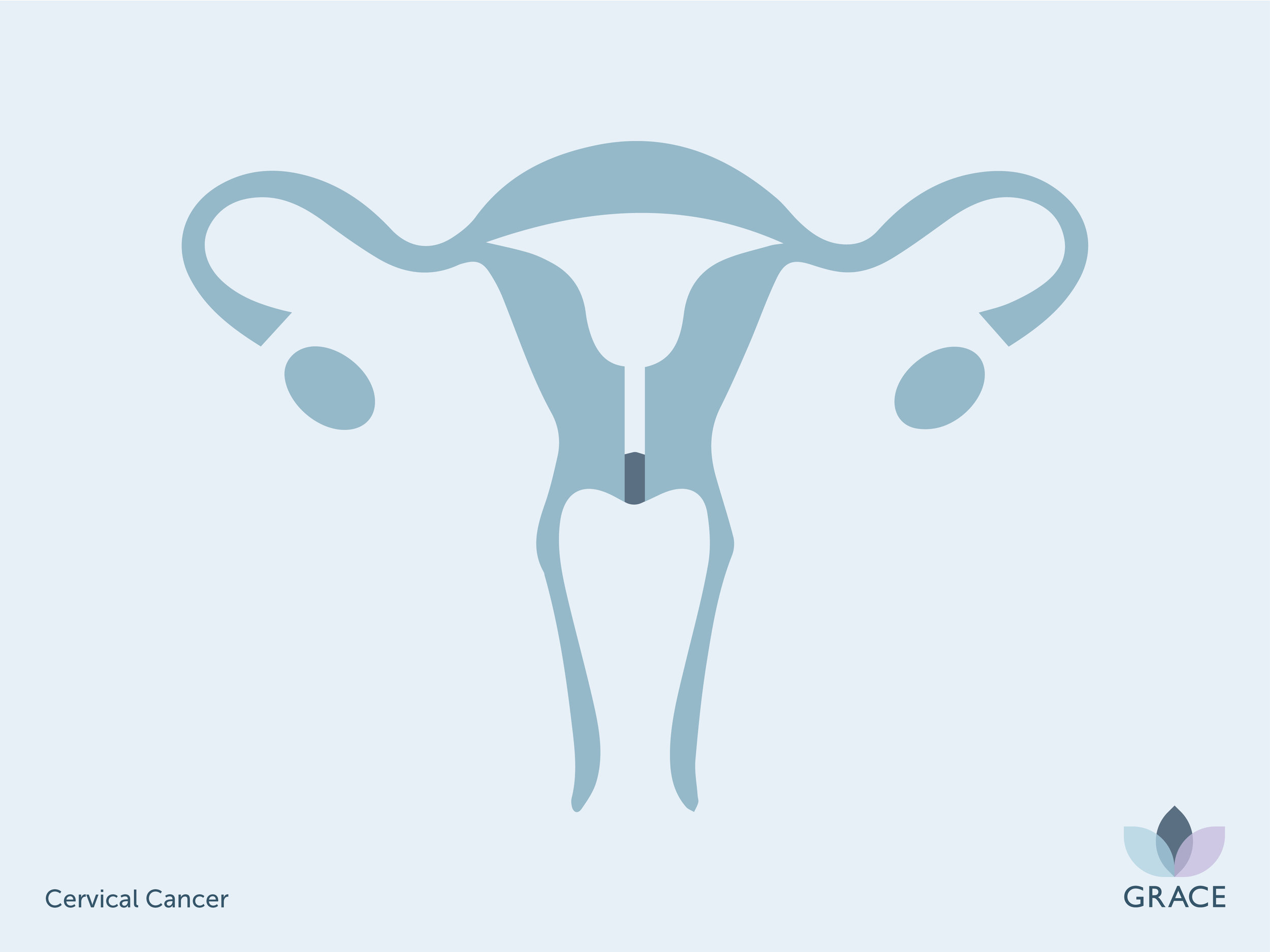 When I heard about GRACE, I was keen to get involved and help raise awareness of cervical cancer. Unfortunately, I stopped attending my cervical screening over 10 years ago.  Before then I kept up to date, but my last screening was very painful so, instead of asking for help, I just decided I would be unable to tolerate the test and stopped attending any future appointments. Also, it seemed to me that I was ‘low risk’ as I didn’t smoke or have multiple sexual partners, so I considered it wasn’t a big problem if I didn’t get screened.

I feel that there needs to be more support for women who are anxious about attending their cervical screening. Since my cervical cancer diagnosis, I’ve spoken to over 100 women individually about it and I think the discussion needs to be opened a lot more. Talk to your daughters,  friends, mother, aunts, nieces, sisters etc. about cervical screening. My sister has always attended her screening tests but neither of us got round to talking about it to each other. We only spoke about it following my diagnosis. If you talk about it with other women, you’re more likely to attend yourself and get other women to attend too.

Women are put off their screening for a combination of reasons – fear, embarrassment and access to appointments are all big factors.  I really feel screenings at weekends and evenings should be available. For  women working full-time, attending a cervical smear can mean taking time off work which can be difficult. I also think it isn’t always a priority for  women who have busy lives. What I say to women is: “make the appointment and you’re halfway there”.

So far, I’m clear of cancer. But I have check-ups every few months with the surgical and oncology teams in hospital out-patients. For me now it’s all about keeping active and working to raise awareness of cervical cancer. I really really wish I’d attended my cervical screening because then I could say “well, I’ve done the best I could”.  I’m learning to embrace my condition and I feel that I’ve acquired knowledge and experience which I can use to help other women. At the moment, I’ll continue to speak to anyone that will listen about the importance of cervical screening and being aware of the symptoms of cervical cancer.“