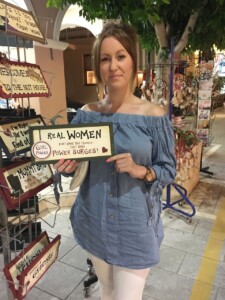 GRACE Woman Hannah Baker was diagnosed with cervical cancer at just 24 years old. She had been feeling unwell for a couple of years prior but was refused a smear test because she was too young.

She told Eagle: “I tried pushing for answers but was never offered anything else or any other route to follow.” After receiving her diagnosis at 24 years old, Hannah had six weeks of intense operations, chemotherapy and radiotherapy. She had a severe reaction to some of the treatments leading to five weeks in intensive care.

Speaking to the Farnham Herald, she said: “I was totally lost for words when I was told I had cancer. Many people may think that women under 25 cannot get cervical cancer, and although it is rare, I am proof they can.”

“The past couple of years have been a real struggle, not only because of the physical effects of chemotherapy but also the emotional side. Nothing can prepare for being told you have cancer, so coming to terms with that has been really difficult. The support from my friends and family really helped me through some difficult times. “I am still concerned about the care I received but I just hope that by speaking out people are aware of the symptoms of cervical cancer and realise early detection is key to beating the disease. “It is so important people seek medical advice if they feel they have some of the symptoms.”

Hannah is now in remission, but her experience has had life-changing consequences and she is now passionate about encouraging all women to attend their cervical screening when invited. She urges: “If you’re over 25 and offered a smear test then definitely do go for it. The way I see it is a smear tests lasts a few minutes, yet the outcome of cervical cancer could last a life-time. I’ll still have bowel and bladder problems for the rest of my life. The emotional side of it will always sit with me. I’m on medication and have to have an operation on my bladder every six months for the rest of my life.”