Surrey and Sussex Cancer Alliance teams up with GRACE

teams up with GRACE

This Ovarian Cancer month, we’ve teamed up with Surrey and Sussex Cancer Alliance (SSCA) to raise awareness of the symptoms of ovarian cancer and encourage women to seek medical help sooner.

According to the SSCA, women across Surrey and Sussex are being diagnosed at a much later stage of ovarian cancer compared with national figures.   This late-stage diagnosis reduces their chances of survival.

“The problem is that many women are still not confident in spotting the symptoms of ovarian cancer and therefore they don’t seek help until the disease has spread which makes it harder to treat,” says Mr Simon Butler-Manuel, SSCA’s gynaecological oncology lead and GRACE founder. “I am delighted that the Cancer Alliance and GRACE are working together to raise awareness. Unlike breast and cervical cancer, there is no national screening programme for ovarian cancer, so the onus is on women to be aware of the symptoms and go to their GP if they are concerned.”

To coincide with Ovarian Cancer Awareness month this March, a new poster highlighting the key symptoms has been produced by GRACE. The poster is being shared throughout the SSCA network – the cancer alliance works in partnership with health organisations including NHS acute trusts, clinical commissioning groups, community services and voluntary organisations with the aim of improving outcomes and care for patients with cancer across the region. 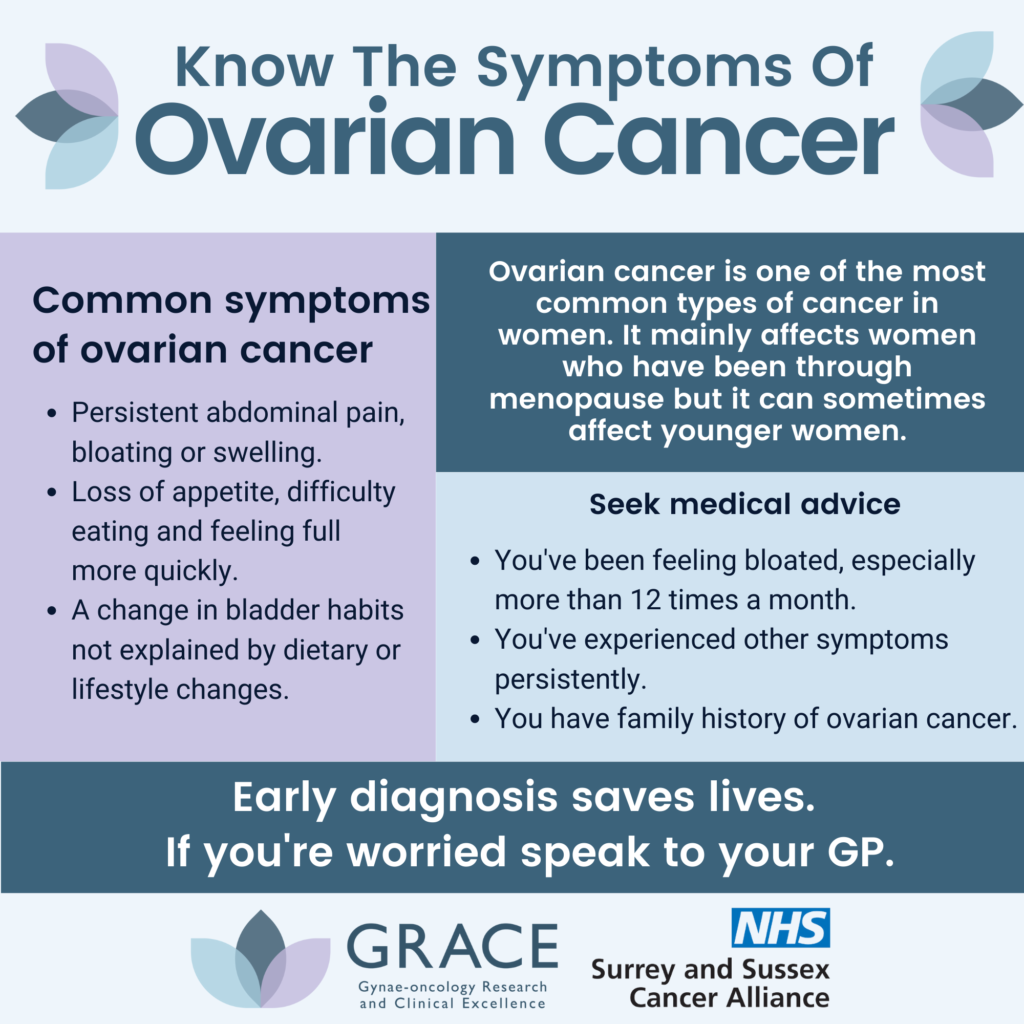 “Unfortunately, women may confuse these symptoms with other health problems such as Irritable Bowel Syndrome or the menopause or simply ignore the changes in their body,” says Dr Jo Thomson, SSCA primary care lead and a GP partner at Mid Sussex Healthcare. “I would urge all women who have had persistent symptoms to contact their GP as soon as possible. `Persistent’ means longer than one month, so it would be a good idea to keep a diary and have this to hand for your appointment.”

Horsham resident Sylvie Allsop, 53, thought her tummy troubles were due to IBS and attributed her sporadic groin and pelvic pain to the onset of the menopause.

“I was having indigestion, constipation and a rumbling tummy after eating and thought that could be IBS. I was also having pain in my groin and pelvis and going to the loo a lot which I put down to the menopause as I was getting to that age,” says the mother of two grown-up sons. “I tried eating different types of food to see if it would get better but it didn’t. I researched the symptoms and thought maybe it is ovarian cancer but I didn’t want to believe it as I thought I was relatively young to have that.”

She went to her GP several weeks after she first started having problems and was later diagnosed with ovarian cancer. Sylvie is now in remission following a hysterectomy in August 2019 at East Surrey Hospital and chemotherapy treatment at St Luke’s Cancer Centre in Guildford.

“So far, so good but sometime I get very down as I am frightened the cancer will return,” adds Sylvie. “Spotting the symptoms is very hard so raising awareness is a good thing for everyone.”